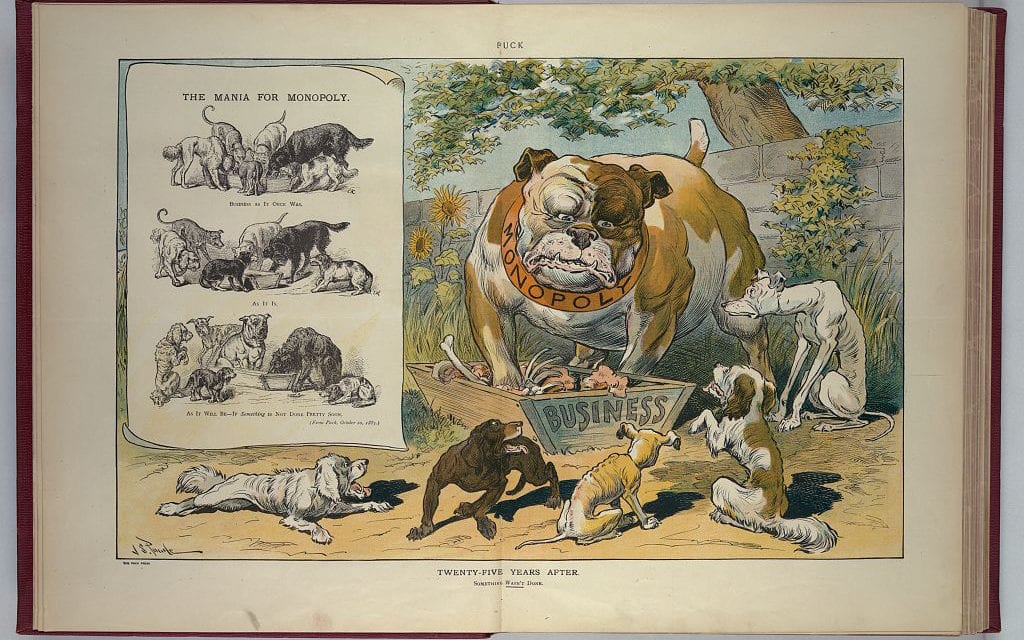 In 1871, Austrian-born American Joseph Keppler, cartoonist and caricaturist founded Puck, a weekly magazine in St.Louis, USA. It was the first humour magazine in the United States, shining a satirical light on the social issues of the “Gilded Age.” It lampooned politicians, Captains-of-industry and other prominent figures. Cartoonists Joseph Keppler and John Samuel Pughe created a unique anthropomorphic editorial style of illustration that included dogs, cats and other animals as instruments of caricature, to depict their targets for comic effect.

Its biting wit grew in popularity, with English and German editions of Puck launching in the 19th and 20th century.

Here are some of the captions and illustrations of the day. 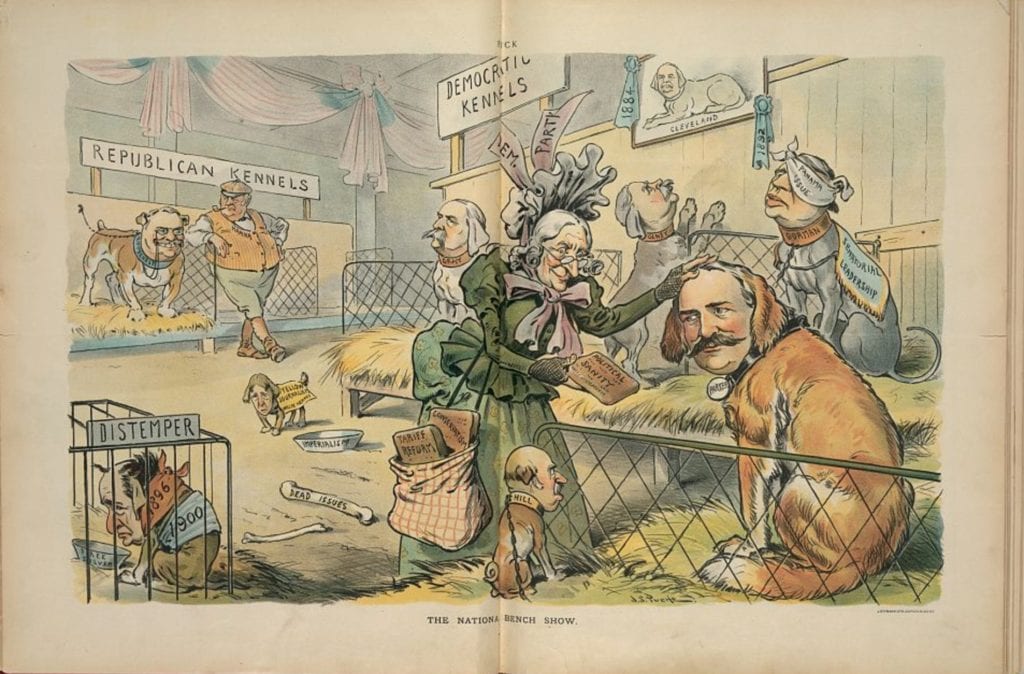 The national bench show / J.S. Pughe ( 1870-1909).
Illustration shows the “Republican Kennels” and the “Democratic Kennels” at the “National Bench Show” with President Theodore Roosevelt as a dog with his trainer Mark “Hanna” and an old woman labeled “Dem. Party” patting Alton “Parker” on the head and offering him a bisket labeled “Political Sanity,” as other Democratic dogs George “Gray,” Richard “Olney,” David “Hill,” and Arthur “Gorman” labeled “Senatorial Leadership” and “Panama Issue” are kenneled nearby; hanging on the wall is a picture of “Cleveland” with ribbons labeled “1884” and “1892,” and in the lower left is a cage labeled “Distemper” with William Jennings Bryan as a dog bandaged with “1896” and “1900” sitting inside before a small dish labeled “Free Silver”. In the center, at left, is a small dog labeled “Yellow Journalism Willie Hearst.”  Source Library of Congress 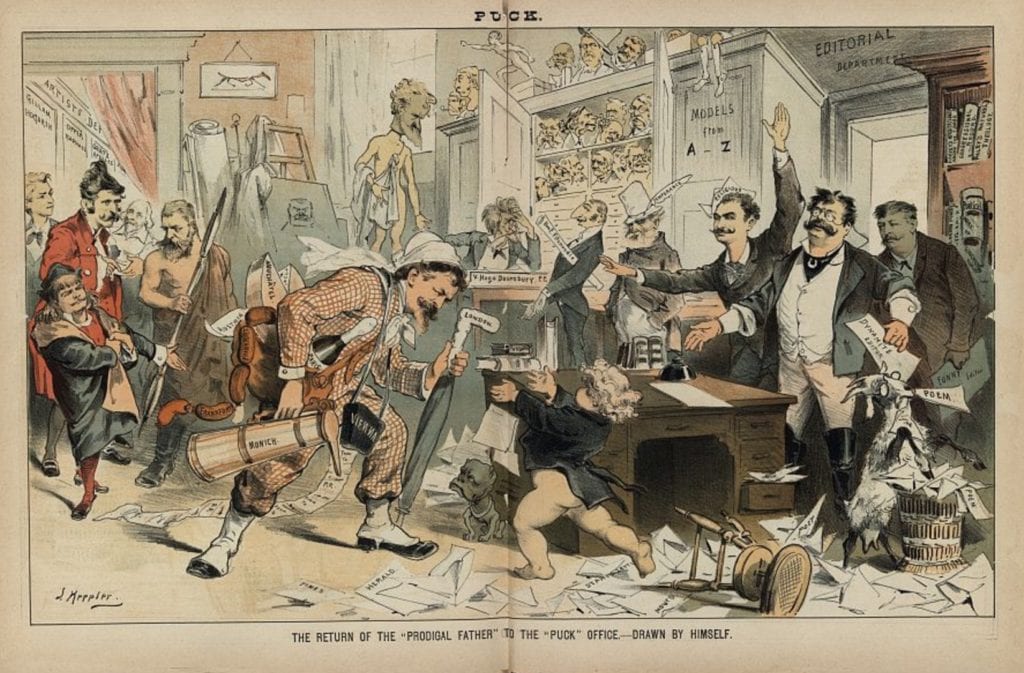 The return of the “prodigal father” at the “Puck” office. Creator: Joseph F Keppler (1838-1894)
Print shows Joseph F. Keppler returning to the “PUCK Office” after a vacation in Europe, laden with a string of “Frankfurt” sausages, “Paris” wine, “Neuchâtel” cheese from “Austria,” an umbrella labeled “London,” and a large tankard labeled “Munich”; Puck rushes to greet him, and other staff crowd the office. On the left is the “Artists Department ” with “Gillam Hogarth, Opper Raphael, Gräetz Apelles, & Zim” emerging to welcome Keppler home. There is a cabinet at center, in the background, with bust models of William H. Vanderbilt, Benjamin F. Butler, George M. Robeson, James G. Blaine, Samuel J. Tilden, Carl Schurz, Ulysses S. Grant, Chester A. Arthur, James G. Bennett, and on a statue is a bust of Roscoe Conkling. Next to the “Editorial Department,” on the right, are books labeled “Harvey’s Meditations Among the Tombs, Congressional Record, Paley’s Natural Theology, Poetical Works of G.W. Childs, & London Punch.” Source Library of Congress 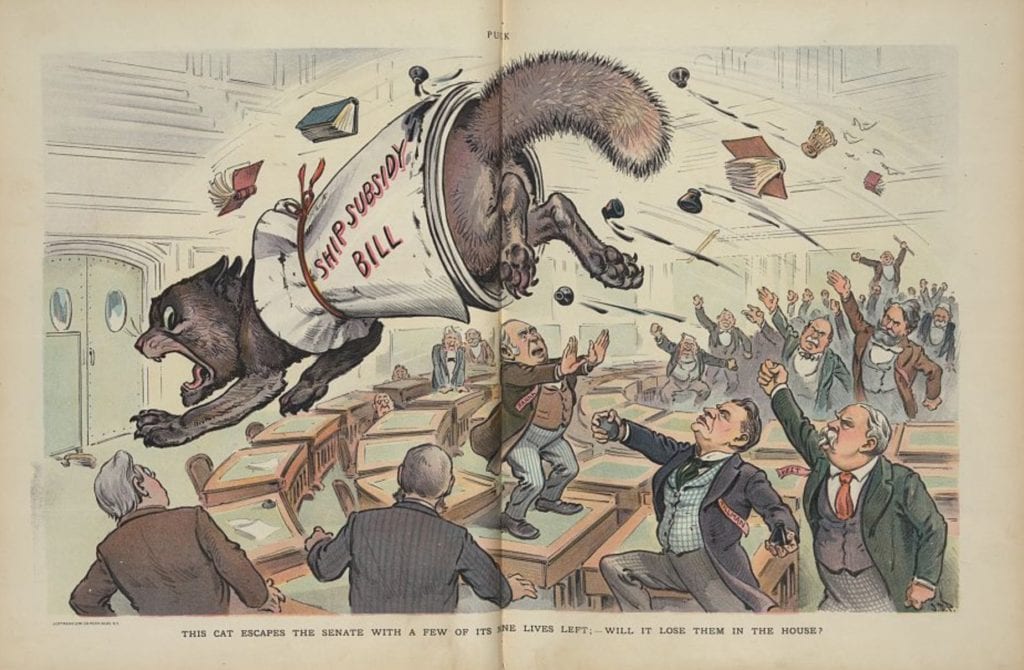 This cat escapes the Senate with a few of its nine lives left; – will it lose them in the House?  Creator:John S. Pughe. Illustration shows a view in the Senate chamber at the U.S. Capitol of a large cat with papers tied around its waist labeled “Ship Subsidy Bill”; it is making a mad dash for a door as senators throw ink pots and books at it while Mark Hanna tries to get them to stop. Senators Vest and Tillman are identified in the foreground as being in opposition to the bill. Source Library of Congress 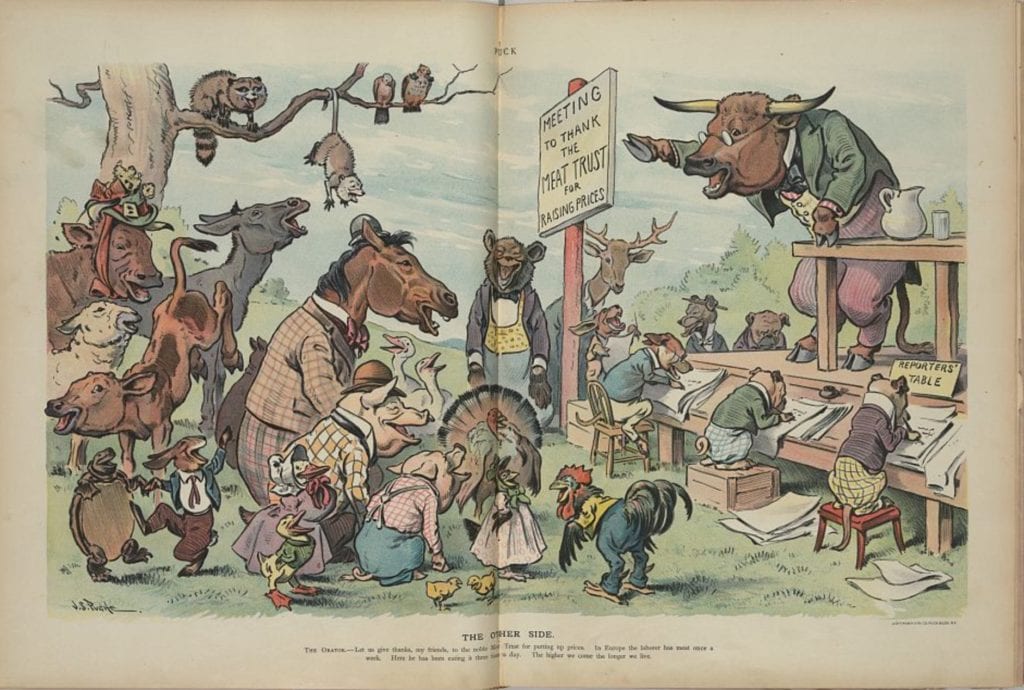 The other side / J.S. Pughe. Illustration shows a large group of happy animals gathered around a sign that states “Meeting to thank the Meat Trust for raising prices.” There is a bull standing on a platform, addressing the gathering. Source Library of Congress 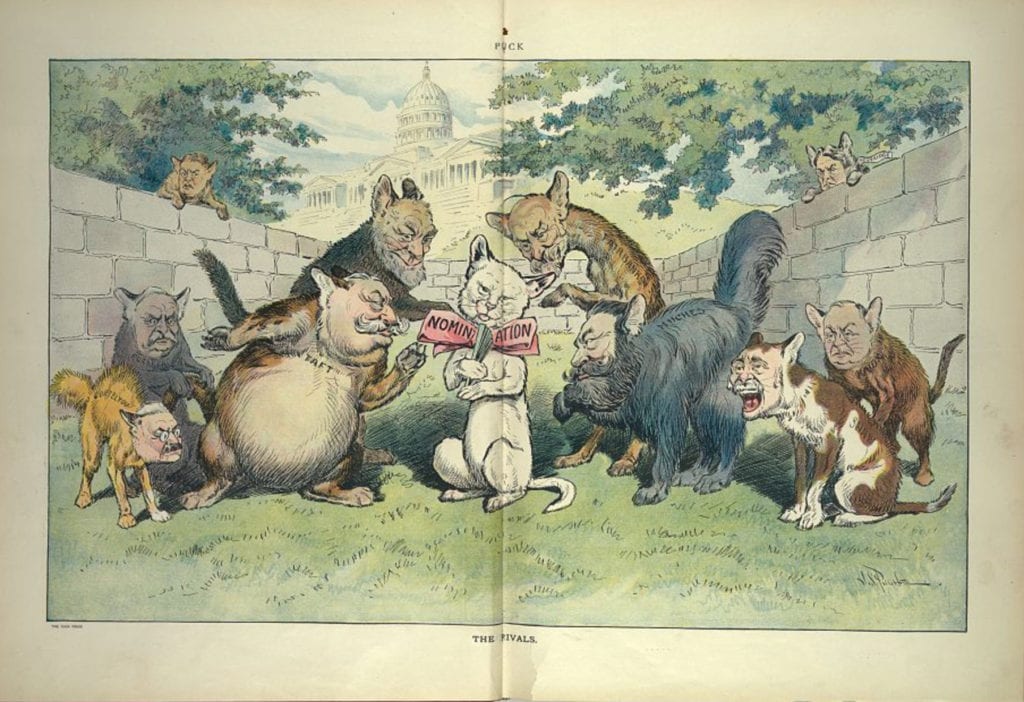 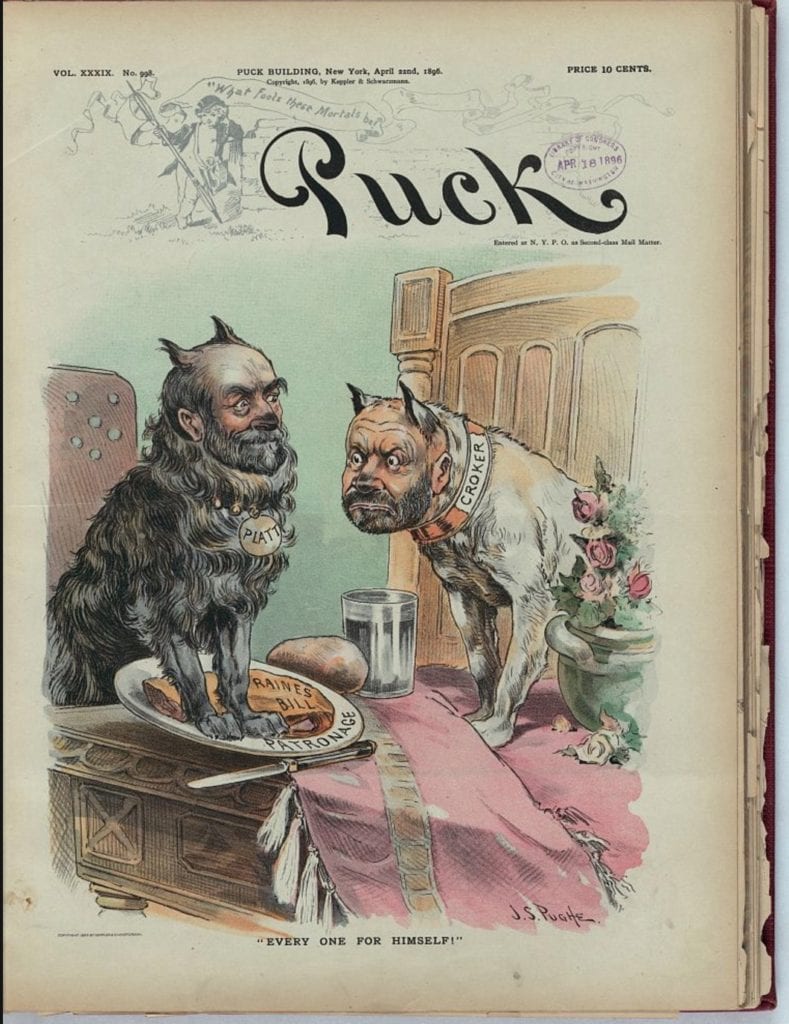 “Every one for himself!” / J.S. Pughe. Print shows two dogs on a table; one dog labeled “Platt” has its front paws on a platter labeled “Patronage” on which is a piece of meat labeled “Raines Bill,” the other dog wearing a collar labeled “Croker” is looking wide-eyed at Platt. Source Library of Congress 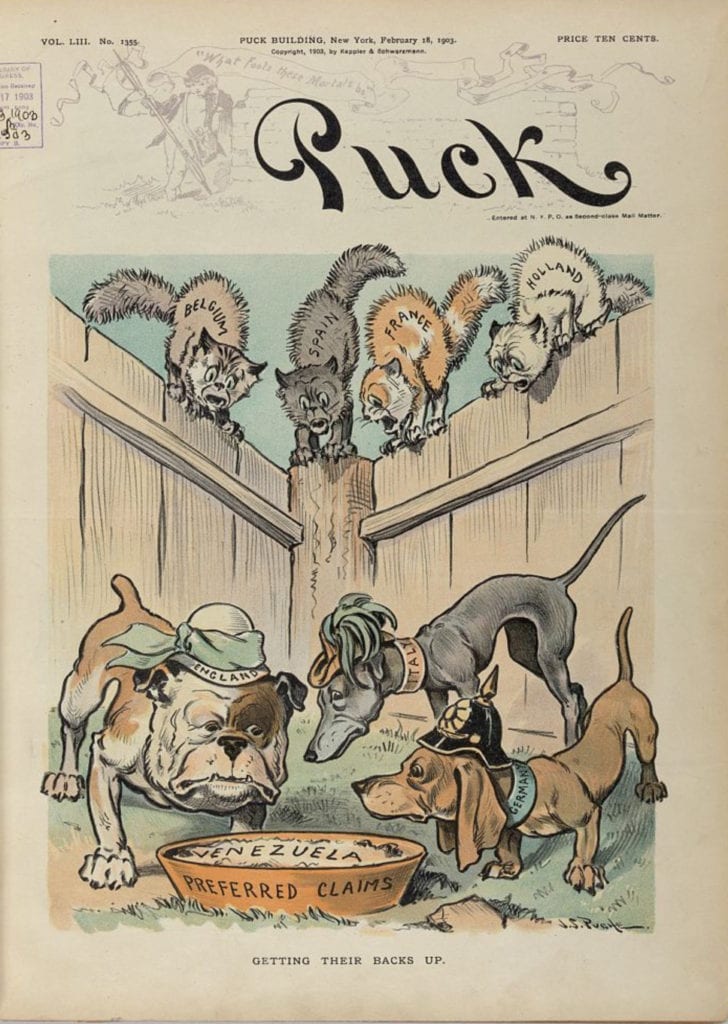 Getting their backs up / J.S. Pughe. Illustration shows a bull dog labeled “England,” a whippet (or greyhound) labeled “Italy,” and a dachshund labeled “Germany” gathered around a dish labeled “Preferred Claims” full of food labeled “Venezuela”; sitting above them on a fence are four cats labeled “Belgium, Spain, France, &  Holland” with the fur on their backs raised. Both cats and dogs are seeking payment from Venezuela for its international debts. Source Library of Congress 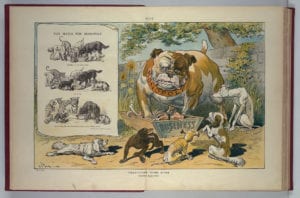 Twenty-five years after / J.S. Pughe – Illustration shows a bloated bull dog wearing a collar labeled “Monopoly” controlling a food trough as five emaciated dogs wait for an opportunity to eat. An insert labeled “The Mania for Monopoly” reprinted “(from Puck, October 10, 1883)” shows “Business as it once was” where all dogs ate from the trough at the same time, “As it is” when it became a dog-eat-dog business environment, and “As it will be if something is not done pretty soon” where one dog controls access to the trough or business market. Source Library of Congress 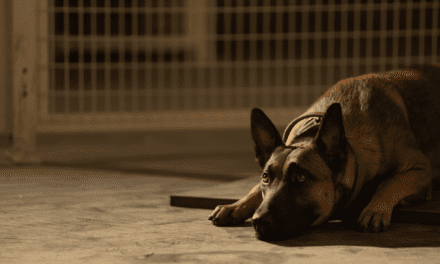 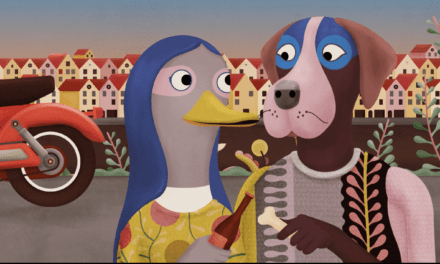 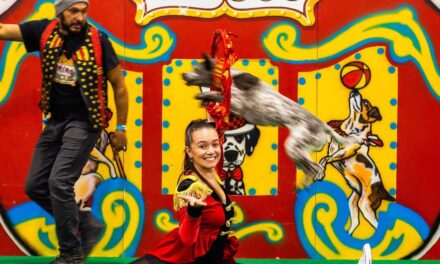 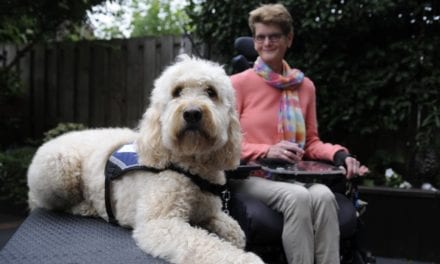